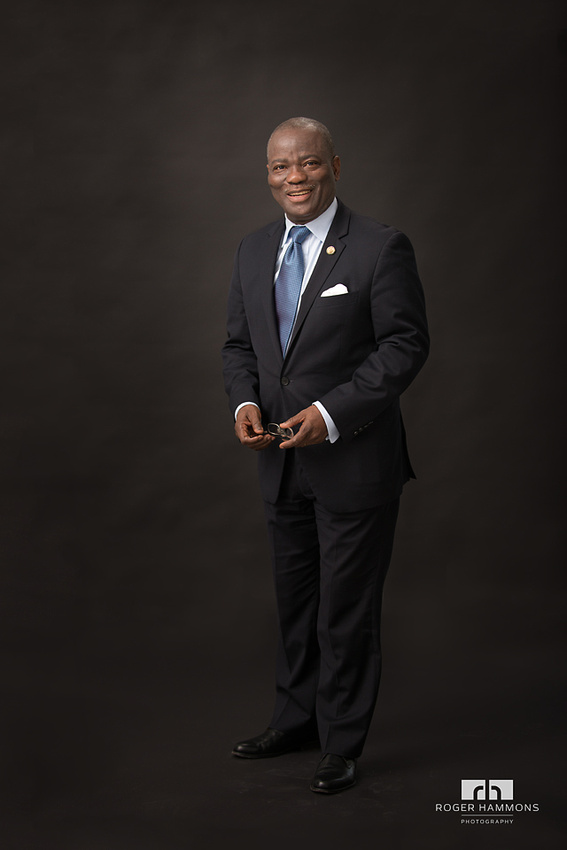 It was my great honor to start September with a portrait session for Ambassador Hector Posset, the ambassador to the United States from Benin.

I did not know much about his country before we met for the portrait session at Blue World Media in Alexandria, Virginia.

As Ambassador Posset and I chatted, he told me that Benin is a popular tourist destination, especially for African Americans in the southern United States and Caribbean region.  The country is famous as the birthplace of the traditional African religion known as Vodun or Voodoo.  In early January, the port town of Ouidah hosts the country's traditional Vodun (Voodoo) Festival, a week-long celebration for both the faithful and the curious.  The town also played an infamous role in the slave trade.  In Ouidah, the memorial "La Porte du Non Retour” ("Door of No Return") marks the site where millions of people were once removed from Africa as slaves.  Tourists are also attracted to the Parc National de La Penjari in the northern part of Benin, which is famous for its wild animal safaris.

For the ambassador's portraits, I used a dark gray seamless paper as the backdrop, a large softbox as a main light, and a small stripbox as a subdued accent light.  I took head and shoulder portraits of him seated, on an adjustable posing stool, and later brought in a posing table for a few thoughtful poses I had noted when we were chatting earlier.

In addition to the traditional headshots, Ambassador Posset wanted a full-length portrait, so we reset the backdrop and adjusted the lighting accordingly.  The result above became one of my favorite portraits from the session.   In the full-length portrait, the ambassador's poise and dignity are readily apparent.  He is clearly a man of importance and accomplishment.  And his personal warmth is also apparent in his smile and inviting stance.

Ambassador Posset plans to hang one of the portraits I took of him in the Benin embassy in Washington DC.  I wouldn't be surprised if this portrait turns out to be his favorite, too.